The Zanesville Think Tank on Poverty serves the city of Zanesville, and the greater Muskingum County region. 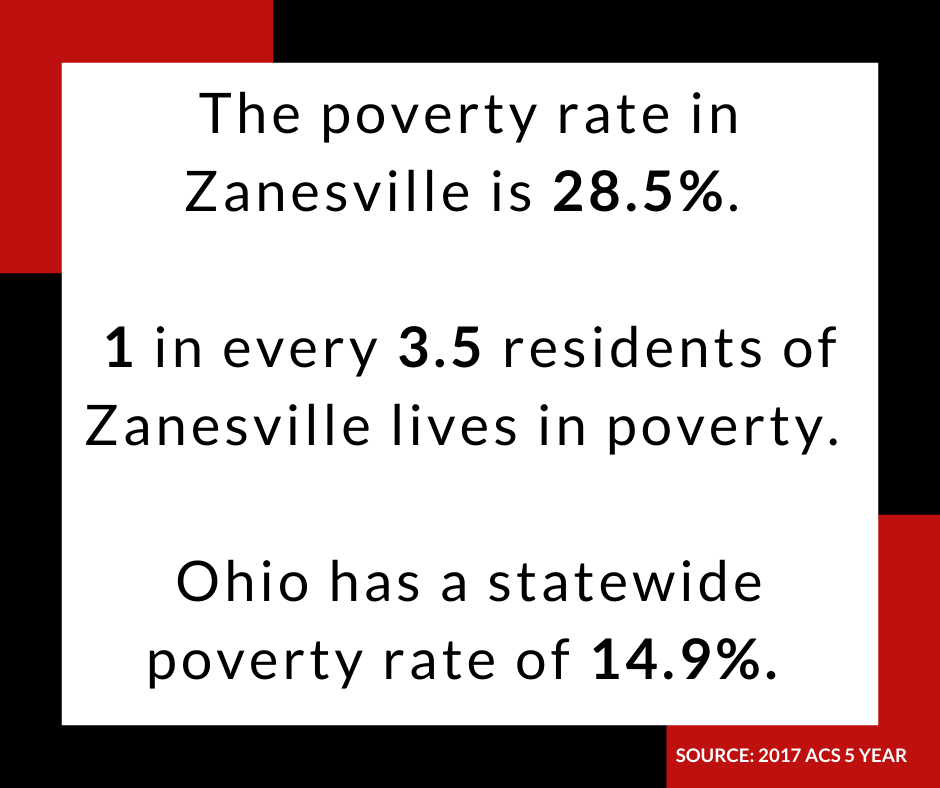 The Zanesville Think Tank on Poverty (ZTTP) was formed in 2018 by local leaders who decided to start a Think Tank in the region to address the structural issues that keep people in need. The ZTTP generated a strong leadership team, working with a range of directly impacted people, social services, community leaders, and partners to work on mapping the needs and challenges in the community related to poverty. The Zanesville Think Tank on Poverty launched the Zanesville Citizen's Housing Connection in 2020 to assist people facing eviction and housing insecurity. The ZTTP also launched a new entity called the Neighborhood Housing Group (NHG), which will work in collaboration with the ZTTP and help coordinate and pursue specific community development projects, like affordable housing.

In 2020 leaders of the ZTTP began working with the City of Zanesville and Praxia Partners on a proposal related to the development of new affordable housing units for low-income and working people. This effort is ongoing.

The ZTTP has had government leaders, city council, legal aid, criminal justice, United Way, and a range of community service providers attend our meetings and participate. A poverty simulation with the United Way, and engagement with the city about rumored evictions of some of the most vulnerable in the city, moved the ZTTP into the issues of affordable housing and renter's rights in 2018.

The ZTTP voted and decided to work on a number of issues, including housing, reentry, and other topics related to addressing homelessness. Activities and accomplishments from 2018 - 2020 include:

For more information on current activities, please follow or message the ZTTP on Facebook or email [email protected]

A nationwide analysis shows property taxes have been overvalued in low-income, minority areas of Zanesville. As part of the University of Chicago's nationwide Property Tax Project, an evaluation of Muskingum County property taxes showed the least expensive homes were valued at a rate of nearly twice as much as the most expensive. To read more, click here.

Times Recorder: Report: Things looking up in smaller cities, but what about Zanesville? (Jan 2020)

(Mason) wants to have discussion with local banks to help find a solution for refurbishing homes that can be sold to eligible home buyers. Mason is encouraged by local support groups, such as The Friends of Putnam and the Think Tank on Property, who have approached him with ideas on ways to improve housing stock." Communities are better with more owner-occupied structures," Mason said. . . To read more, click here.

There are over 200 Zanesville residents who are currently homeless. A new grassroots organization is striving to bring awareness to the homelessness crisis in the city while partnering with homeless individuals. SOS Zanesville is attempting to bring the issue of homelessness to light and help secure affordable housing for area residents. Marcia Hartman, an SOS Zanesville Member, says one key challenge of the crisis is a low rate of compensation across the area... To read more, click here.

Samantha Crawford left prison in 2013 with a "stay out plan," not a "get out plan." After nearly 30 months of incarceration, Crawford earned a judicial release hearing with Licking County Judge Thomas Marcelain, during which she requested Marcelain to send her back to the Licking County Jail so she could wait for a bed to open at the Courage House in Newark. She completed the program in about four months and moved to the Salvation Army, where she filled out two job applications a day and volunteered at her dad's body shop during her free time. . . To read more, click here

The Zanesville Think Tank on Poverty is in the process of establishing a program aimed at identifying housing issues in the community. After recently being awarded about $27,000 through a City of Zanesville Community Development Block Grant over the next two years to create the Zanesville Citizen Housing Connection, the group is finalizing plans to launch in January. “We proposed this idea for the Zanesville Citizen Housing Connection because when we started the Zanesville Think Tank and we asked people what’s keeping them and the community in poverty, the lack of affordable housing was the thing that came out on top,”. . .  To read more, click here.

When Melissa Rice walked into a room full of middle-class, college­ educated professionals for a meeting meant to discuss the poverty-related issues in Muskingum County, the single mom who works a part-time, minimum wage job didn’t think anyone there could understand the struggles she goes through on a daily basis... To read more, click here.
Do you like this page?
Tweet